Mimi couldn’t find her calculator the other day while she was doing her math homework, so she asked to use my iPhone instead. She was perched on my bed to work while I sat at my desk translating marketing materials for French cheeses. We often hole up in my room while Aida is downstairs wreaking havoc with Icky McGreenboots, because it’s easy to lose your focus on Camembert or algebra with the kinds of after-school antics Aida gets into.

The calculator request wasn’t surprising. Functional calculators are a rare commodity in our household, since Aida has a thing for numbers. One expression of this is that she likes to take a calculator and count up on it. Her fingers move at top speed and she leans in looking at the screen with the intense concentration of a genetics researcher parsing out a bit of DNA code. What she’s doing instead is punching in 1-clear-2-clear-3-clear… 27-clear… 183-clear… as high and as fast as she can go until we take it away from her. She’s not deliberately destructive, but your average plastic calculator button doesn’t hold up well to this kind of treatment.

I tuned Mimi into the background until she needed my help with her math – then at some point tuned back in when I heard her talking… and realized it wasn’t to me. “Siri,” she was saying, “If a boy runs six miles in one hour, how long does it take him to run 48 miles?” “May-be this will help you,” replied Siri, displaying a screen showing her calculations. 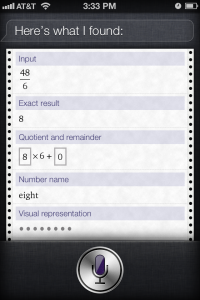 Obviously I couldn’t let Mimi use Siri to do all her math thinking for her – I wish I could have bottled her groan-slash-whine (how do they do that?) when I told her to stick to the calculator utility for her homework. But mostly I was impressed at her initiative and at how easily she learns to manipulate her world.

Because Aida is my first-born, it’s easy for me to forget how naturally regular kids develop all the basic knowledge and skills they need, growing up. Nothing comes easily to Aida – it seems like every single useful thing she’s learned about interacting with the objects and people around her has had to be taught, by first organizing it into manageable steps for her, and then through sheer repetition. Drying off after a shower, for example, is broken down into swiping the towel across each part of her body in turn. Aida doesn’t seem to notice or care about being wet or dry, particularly, or doesn’t make the connection anyway between the discomfort of being wet, and the wetness itself – her face clearly expresses her belief that this toweling-off thing is another one of those crazy routines we put her through for no reason. Like combing her hair, or wearing clothes.

Mimi first displayed her absolute genius to me the summer after she turned three, by buckling her little purple sandals all by herself while I got Aida ready to take them both to the playground.

“Oh my God, Mimi, what have you done!!?” I cried. She looked a little puzzled: “Put on my shoes?” she said tentatively. I called Nana and Eenie right away to share the amazing news, which seemed nothing short of miraculous to me. “I never even showed her how!” I kept repeating, “and she did it anyway!” Eenie seemed a bit taken aback at my unbridled praise, and pointed out somewhat acerbically that Nephew had also learned this skill at age three. “It’s perfectly normal,” she said. 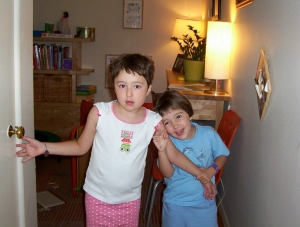 I’ve since seen this type of reaction in others who, like me, have lives so strongly defined by autism that they don’t recognize normal when they see it. One of Aida’s early elementary school teachers decided to give sign language classes as one of the school’s extracurricular programs. She worked in a self-contained special ed classroom during the day, so the typical kids in this after-school program were an unfamiliar breed to her. “They’re amazing!” she told me. “You show them a sign once, maybe twice – and they’ve learned it. That’s all they need!”

Conventional wisdom is that we’re supposed to carefully nurture our children’s sense of self-worth and confidence. Possibly I have taken this too far with Mimi, whose blazing self-assurance sometimes shades into the red zone. It turns out regular kids do just, you know, learn things. It’s nothing special.

Except that it is. When you know a child whose brain is off-kilter in such a way that nothing comes easily, you realize how truly marvelous all that regular, everyday learning is. When you see how many different ways a brain can go wrong, and spend years trying to help Aida or someone like her work fixes around those broken bits – then a mind that is humming along normally becomes astounding… inspiring… and something to be profoundly grateful for.

2 thoughts on “Siri and Mimi”