Last week I received an email from Aida’s teacher describing her day, a couple of paragraphs of anecdotal information ending with this gentle reminder:

“Also, I think Aida is growing out of her swimsuit.  It is pretty tight (especially in the chest area).  Does she have another one?”

Aida has loved the water her entire life – she was one of those babies who visibly calmed in the bath and obviously loved the feel of the water surrounding her. Her first weeks home from the NICU were stress-filled in many ways, with feedings mandated every three hours – first a bit of breast, always followed by a bottle to make up for her weak suck – and daily weigh-ins. (These things become deeply ingrained in a new parent. When Mimi came along later – a full-term baby with perfectly adequate body weight and a ferocious suck – and began, by two weeks of age, sleeping for a six-hour stretch at night, I called the pediatrician’s office in a panic asking if I should wake her up for a nighttime feeding. The nurse laughed and said “Why would you want to do that!?”)

But Aida’s baths were always a relaxed moment in the day, when she would unclench her body and smile up at us with that expression of unmitigated delight that comes naturally only to babies. 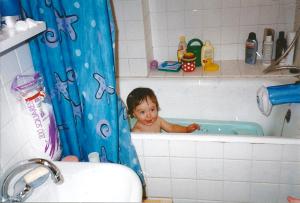 We didn’t know, then, that her sensory processing was a quirky mess, and that her craving for a watery shell around her was probably a more urgent feeling than for more “typical” babies. I didn’t even know yet that she couldn’t hear me singing “Rubber Ducky” to her in my lovely off-key alto. She did show surprisingly sharp attention to water temperature, though. This became clear when we visited my in-laws at their home in Dijon for the first time after Aida was born. She was about nine months old by then and took her baths with one of those supportive rings in a regular tub. Belle-Mère, thrilled to get her hands on her foreign-born grand baby at last, had taken her upstairs and began to run water while I sat out in the garden trying to recall what it felt like to relax fully with an apéritif in my hand.

That lasted just a few minutes before I heard Belle-Mère calling: “Mais, qu’est-ce qu’elle fait? Je ne comprend pas! Jooooy!” I downed my Kir resignedly, went back into the house and ran upstairs – to find before me the comical scene of Belle-Mère holding my daughter over the bathwater, trying to lower her in, while Aida lifted her legs up into the air, kicking them progressively higher the lower she was held to avoid getting wet.

Belle-Mère is one of those people who tend to take even neutral life events as a personal affront, particularly in the moments of the day between cigarettes. “You told me she loves her bath!” she said accusingly, continuing to hold Aida in her outstretched arms over the tub – but I was as mystified as she by this never-before-seen turn of events. I came closer and touched the water… which was lukewarm. “Oh,” I said, as neutrally as possible, “she probably wants the water to be hotter.”

“Mais non!” insisted Belle-Mère, “it is the perfect temperature. Look!” She pointed with her chin to the little plastic fish-shaped thermometer lying at the bottom of the tub. It had no actual temperature markings, just one line labeled “Le bain de bébé” (“Baby’s bath”). In classic French fashion, a single precise circumstance was to apply to every child, and woe to the baby who doesn’t conform. Aida wriggled her legs higher as we both leaned in to see that, en effet, the mercury lined up perfectly with the “Baby’s bath” marker. “I see that,” I said carefully, “but the water feels cooler than Aida usually likes. I think that’s why she won’t get in.”

“Ah, so now I don’t know how to bathe a baby!” said Belle-Mère predictably, and left me to give this irritating grandchild her too-hot American bath.

Once Aida started walking, if we let her out of her stroller she would make a beeline for any water features she spotted on our strolls through the Paris parks or, more worryingly, along the Seine. She was completely undeterred by our calling out to her to stop – it turns out she couldn’t hear us, of course, but with what I now know of autism I also think hearing us might not have made much difference in the face of the attraction the water held for her dysregulated body.

As she grew and we advanced past the milestones of her diagnoses – hearing impairment just before she turned two, sensory integration disorder at three, autism by age four – always in the back of my mind was the issue of water safety and the goal of figuring out how to teach it to this child who seemed impervious to learning anything at all for so many years. I eventually tracked down adaptive swim lessons through the network of parents at her developmental preschool, and patiently outwaited the waitlist until her slot came up. Thus began, at the age of six, Aida’s swimming exploits – and my own trials with finding and keeping her in appropriate swimwear. And I do mean “keeping her in” quite literally.

Aida’s first several years of swim lessons coincided with her final several years of toilet training, so the swimwear priority was a two-piece suit that could be removed quickly when she got that pensive, inward-looking expression on her face that those of us in the know took as our cue to rush her out of the pool and straight to the girls’ toilet. A rather stressful side effect (for me) of the relaxation that hit Aida’s body when it submerged in warm water, was that it helped her get past the sort of confused constipation that was the normal state of her poor autistic bowels for many years. And she, with her charmingly impaired social awareness, had no idea why it wasn’t okay to just go with the flow of her inner sensations and release that extra ballast straight into the comforting embrace of the pool.

Now that toilet training is essentially over (for the most part, anyway – if you don’t count nights – and barring the occasional lapse to keep us caregivers on our toes), the major swimwear requirement is a suit with comprehensive and uncomplicated bosom (as Big Jane calls it) coverage that is difficult to strip off quickly.

Aida still occasionally flashes the patrons of the evening open swim at the community center pool – uncaring of modesty, I assume because of her autism, although it might just be the French half of her DNA coming out. Last time this happened she was on her way to the dressing rooms and simply decided to begin stripping down before crossing the threshold, because who wants to wear a dripping wet swimsuit once the cold air in those stark concrete spaces hits your goose pimples?

This particular breach of propriety has become rarer over time, so we’re not always ready for it like we once were back in the days when Aida not only stripped off her suit at whim, but would actively make a break for it if we let our attention waver for even a second in the showers, and dart out for a delighted skinny-dip amongst the other bathers. Any hope I might have of her nudity going unnoticed was always immediately dashed, because Aida is not subtle about announcing her presence. We would find her shrieking at the top of her lungs, jumping elatedly up and down in the water and slapping up huge splashes with her hands. The other swimmers generally gave her a wide berth – and their undivided attention.

These days, though, our primary swimwear issue is one of maintaining bust coverage on my ever bustier daughter. The suit she took to her school swim last week wasn’t technically too small – it’s just that, like with any women’s swimsuit, really, you need to maintain a modicum of awareness of how the straps and flaps are sitting on your body, and apply the occasional discreet adjustment to make sure everything stays inside. Aida, who couldn’t care less about all this, just lets the fabric shift around as it will with each flailing movement of her inelegant but effective swimming style.

Still, I ordered new suits, what they call “modest coverage” on the Swimoutlet website, so at least the straps are broad and there are no misguided slit-style features or low-cut regions. Nina C tried one out with her this weekend, and sadly reports that, while an improvement, there’s really no keeping the girls unreservedly inside when our girl doesn’t give a damn about it.

While I want Aida to have the social skills to function acceptably in community settings, and countless hours and months and years of hard work have been put in to this end by myself and her many behaviorists and teachers, I find myself fairly laid back about the nudity issue. How many girls and women past their pre-teen years can glory in such unsullied body acceptance and unselfconsciousness? I could wish for Mimi to travel through adolescence with an equal degree of love of her body solely for the exciting things it can do and feel, rather than how it appears to other people.

Some days I need a reminder for myself, when I look in the mirror and new floppy bits and wrinkles seem to emerge around my heading-for-middle-age physique. That’s when I think back to Aida’s six years of swim lessons at the adaptive therapy pool at Children’s Hospital, and the many kids I met there who must brave life in bodies that might be largely out of their intentional control, lack some of the conventional parts, or spasm in near-constant pain… And I give myself a well-deserved internal slap, order up a swimsuit with better coverage, and dive back in.

Mind the gap »
« On love and space freighters